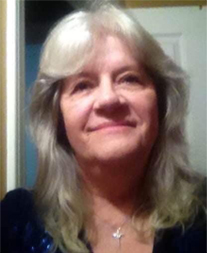 Silvia Dawn Adams,72, of Tobaccoville, NC went to be with her Heavenly Father on May 30, 2021 Silvia was born February 19, 1949 in Forsyth county to Arthur and Amanda Henderson. She worked at Western Electric and retired from the Dize Company. Silvia enjoyed the mountains, bluegrass music, playing the guitar, her family and helping her husband with the bus ministry. Silvia is survived by her husband, Fred Adams of Tobaccoville. One son, Joseph Rivers(Tiffany)of Winston-Salem; daughter, Wendy Rivers of Walnut Cove; brother, Jimmy Henderson (Susie) of Midway; two sisters, Linda Minor (Jerry) of Midway and Mary Ann Mayberry (Eddie) of Tobaccoville; two grandsons, Ralph Reynolds(Faye) of Pilot Mountain and Harley Rivers of Walkertown; two granddaughters, Amanda Reynolds of Winston-Salem and Katelynd Rivers of Walkertown; three great-grandchildren, Kalab, Gunner, and Zayden; also several nieces and nephews. Silvia is preceded in death by her parents; brother, Mark Henderson and a stepson, Travis Adams.

A celebration of life will be at a later date.

Silvia was the most loving, giving, beautiful, godly woman. She will be missed very much. Till we see you again, we love you.