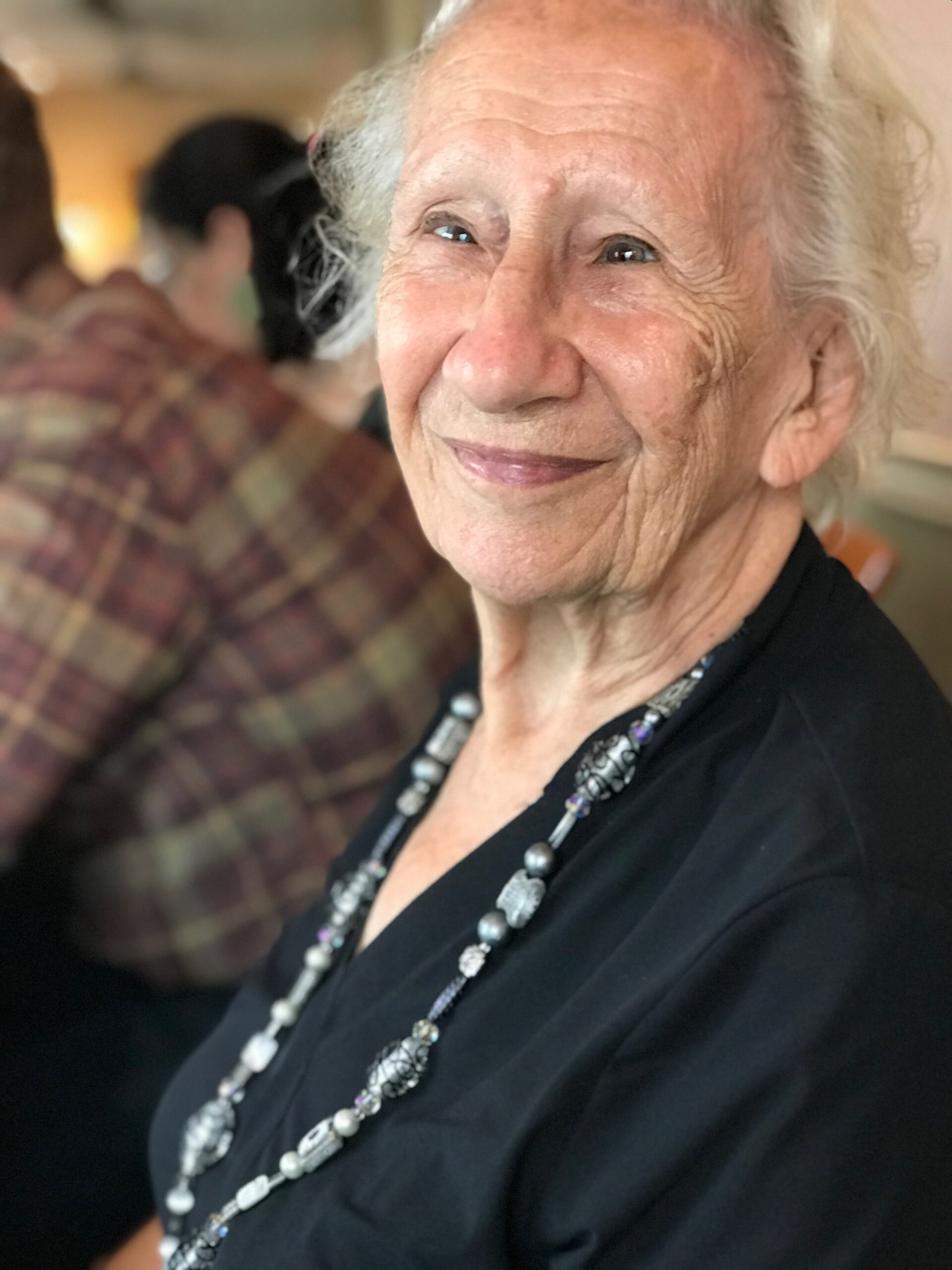 Laura Marie Morton MOTTRAM (nee HAMILTON)
27 September 1927 – 10 November 2021
Laura (94) passed peacefully in her sleep at her daughter’s home in Winston-Salem on Wednesday, November 10. Beloved wife of Philip Sidney Henry Mottram (1931-2014) for 60 years, mother of Catherine (Ken) Snow, Helen (Derek) Parsonage, Simon (Deborah) Mottram & Esther (Guy) Dugdale: grandmother of Benjamin (Renee), Madeleine, Zachary (Kristina), Jacob (Kristen) & Jesse; great-grandmother of Lily; treasured friend of Joan, Moshe and Sigal, Eckhard and Mike, Glynis, and Dora.
Born in Manchester to Muriel May (Morton) and Harold Joseph Hamilton, she also lived for some of the war years in Croydon, South London. After leaving school at 16 she joined the Midland Bank in Manchester (now HSBC) until she left when she got married. The fact that she was discouraged from further education and forced to resign from the bank simply because of her gender instilled in her a strong commitment to education and equality for her three daughters. While at the bank, she also met her friend-for-life, Joan Clapham. They remained close for more than 70 years until Joan died in 2019.
Laura’s teenage years were marked by World War 2, which broke out when she was 12 and ended just shy of her 18th birthday. Memories of the Blitz and air raid shelters in London stayed vividly with her for the rest of her life and were shared with many. Years of rationing left her with a “make-do-and-mend” outlook on life that also stayed with her.
She met Phil in the early 1950s at the Young Conservatives Club (the irony of which will not be lost on those who knew them well), where they enjoyed dancing at social events. The music of Glenn Miller was always one her favorites. To hear them tell it, it was love at first sight and they knew they would make a life together within weeks of meeting. They most certainly did, with a marriage that remained strong and loving for 60 years through all the ups and downs of life. In 1954, after Phil had joined the Royal Air Force, they began their married life at various RAF stations around England. After Phil left the RAF, they moved to London, where Laura remained until 2017.
Once her children were mostly grown, Laura started working again at Southwark Libraries in London and her home swiftly became Laura Mottram’s Home for Abandoned Books. It was also about this time that she developed her passion for the history of London and started taking people around to explore – family, friends and work colleagues. She became a regular at courses and lectures at the Museum of London and the British Museum following her love of Roman and Egyptian history and at lunchtime concerts at the many City of London churches. She made many friends through her activities and loved organising outings or social get-togethers where friends from all her activities would mix and mingle, including her neighbourhood breakfast events. Travel was also a passion and she set off (sometimes with Phil, sometimes alone) to explore Crete, Poland, The Netherlands, Czech Republic, Mexico, Egypt, Saudi Arabia and many more.
As her family spread around the world, Laura visited New Zealand and the USA many times before “retiring” for the last few years of her life with her daughter Helen in Winston-Salem. She loved having the family together, though that was increasingly difficult, but thanks to Zoom she could talk with them and see them every week.
A celebration of Laura’s life will be held at her home in Winston-Salem on Saturday, November 20 at 5 p.m. Eastern Standard Time. Far-flung family and friends are invited to participate by Zoom. For address or log in details, please email hparsonage@gmail.com
In lieu of flowers, please consider a donation to The Donkey Sanctuary in England. Donkeys were very dear to Laura, and she was a regular contributor of funds to this charity, as well as carrots to any donkey she could. Donations may be made at: https://www.justgiving.com/fundraising/LauraMottram