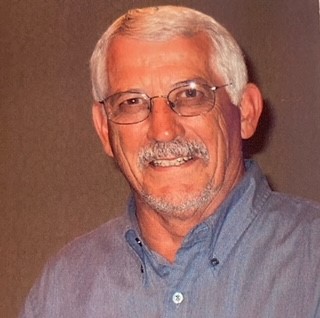 John Adams Harris, Sr., of Greensboro, NC, died on April 21, 2022, at the age of 85, after a long battle with dementia. Born on August 29, 1936, in Buffalo Junction, Virginia, to the late Mr. and Mrs. Thomas Howard Harris (Effie Tisdale), he was raised in Mecklenburg County, Virginia. After graduating from Clarksville High School, he joined the Navy, serving as a sonarman on the USS Rowe. After his service, he attended college on the GI Bill and graduated from Virginia Polytechnic Institute and State University. After college, he began working for Burlington Industries and spent his entire career with the company.

He loved his family, his Virginia Tech Hokies (which were the Gobblers back in his day), the many dogs that were part of his life, music, particularly Elvis and Willy Nelson, Buggs Island Lake, sailing and golfing. While raising his family in Clarksville, he was active as a coach with Dixie Youth and Babe Ruth baseball, and with the Clarksville Mites and Midgets football, serving as a mentor to many Clarksville youth over the years. He enjoyed golfing at Kinderton Country Club, sailing with the Clarksville Sailing Club, attending many Hokie football games, and attending USS Rowe reunions. And he enjoyed entertaining his kids and grandkids playing the guitar and singing.

The family would like to thank the staff of Heritage Greens, Richland Place, Comfort Keepers, Hospice, and the doctors, nurses and aides who provided them with so much guidance and support.

A service of remembrance will be held at a later date. In lieu of flowers or for those who wish to honor his memory, please consider making a donation to your local Hospice organization, to the Dementia Society of America, or to the Alzheimer’s Association. We have to find a cure or effective treatment for this devastating disease.